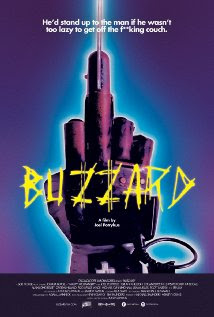 Buzzard is one of those love/hate movies to me. Either you love it or you hate it. Definitely one of the more original movies I have seen in a while. We all  know someone that is like the characters in this film. Somewhere sometime in our lives we have all planned a heist of some kind, well this movie gives you a glimpse of what goes on in your mind when you steal from your employer.

The movie is about a guy named Marty, this dude is most of us. Just shuffling through life with our regular routines, and jobs. This guy is one of the biggest scammers, slackers I have ever witnessed. Well one day his boss gets him to go through some checks and of course Marty decides to steal the checks and cash them for his self. The company starts asking questions, so Marty stays  out of work and slowly descends into madness lashing out at anyone who stands in his way, even his only friend.

Armed with a rad powerglove with knives on the end, kind of like if Freddy’s glove had of been made on a powerglove, Marty sets off on a wild adventure that will change him forever.

I will be honest with you, sometimes I actually liked Marty, but most of the time I hated him. The dude just was a asshole. I liked him because he was different, but hated the guy because of his attitude toward his only friend. The film is a little slow, but once the madness comes on, it’s all downhill from there. There are a lot of funny moments in Buzzard, some things you could see yourself doing. That’s what makes this a cool film. It’s streaming on Amazon right now. If you get the chance, you should give it a try! 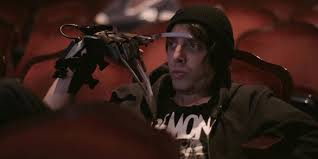 Here is the trailer  https://www.youtube.com/watch?v=wpIctkjNEjA