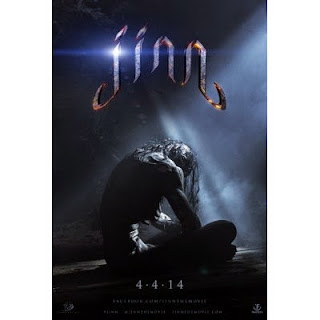 I really had no idea what to expect on this one. I was scrolling through Netflix and noticed this. I didn’t know much about it, but the cover looked cool, and Ray Park acting in it, why not?
So, Jinn is all about a guy named Shawn who is living a very good life, begins seeing strange things that he cannot explain. He receives a VHS tape that reveals details about a family curse, and parts of his past that he could not remember. Not knowing how to deal with the evil that is coming to end his life, a stranger named Gabriel, and  a priest named Father Westhoff help fill in the blanks of Shawn’s family curse and the evil Jinn that wants to end his bloodline. Shawn is left with only one option, confront this evil face to face and end it once and for all.
This movie is all kinds of off the wall. I liked the flashbacks, and loved the fight scenes with Ray Park. I just feel like the movie was missing something. My opinion, if the film had stayed with Shawn’s forefathers story, it would have been better. The Jinn looked pretty rad and had some awesome scenes, I just didn’t care for a good bit of the film. I really wish the priest had a bigger fight scene. That was a build up that let me down.
To me, this is a one time watch. I didn’t hate it, I just wish it could have went a different way. Ray Park was awesome! Glad to see him acting and showing how easy he can kick ass. If you’re bored or just want something different, give it a chance. Streaming on Netflix now.