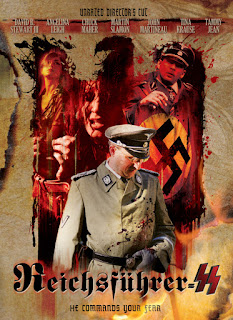 Reichsfuhrer SS- Wow! I really liked this flick. The story of this Nazi killer named Heinrich Himmler, who was one of Hitler’s most loyal followers. Soon, his loyalty is put to the test when another member of the Nazi Army tells Hitler about Himmler becoming sick while executing POW’s. Himmler is sent on a mission to kill a prisoner, this test will push him to limits he never thought he would reach.
Himmler and his men are sent out to a cabin, and Himmler is ordered to kill the female prisoner named Danuta. This woman is tortured, sexually abused, and humiliated. Treated like a pet at first, Himmler soon starts showing the woman a bit of compassion, all the while he is descending into madness.
Himmler is forced to kill Danuta, securing his place in hell.
After he commits suicide, we finally get to see where this feared Nazi henchman ends up, in hell.
We just thought Himmler was evil, Erebus, The Gatekeeper of Hell is going to show him what true evil is all about.
I really got into the whole idea about Himmler not liking to get his hands dirty, and making other people kill for him. To me, this was more psychological. It made you think, it took you on a ride through one of Hitler’s most feared men’s mind, and it was a total mess.
How can you go from family man to a guy that treats a woman like a pet cat? The dude was crazy.
I felt so sorry for the way that Danuta was treated. Having to eat like an animal, being walked, and made to use the bathroom outside. Just tormented.
Seeing where Himmler ends up is not a nice place. He is shown how awful hell really is. What he did to people while he was alive is nothing compared to what he will face in hell.
This was a fun movie to just sit back and watch, loved the flashbacks, really loved how Erebus looked, that dude was rad! I really liked how everything was pieced together to weave this tale.
It kept me watching, and waiting to see what was going to happen next. I recommend this to all my friends wanting to take a journey into the mind of a Nazi killer. 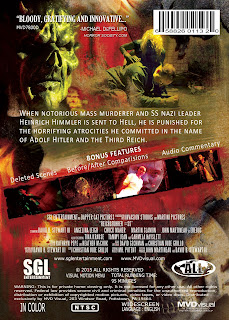 https://www.youtube.com/watch?t=28&v=Jo_V9VErsQE
Check out the trailer now!