The weekend is upon us here at Camp Carnage. We are excited to have our guest counselor Chris from Secondhand Terror to tell us all about Zombeavers! So gather around the campfire, and get ready to be scared senseless by Chris! 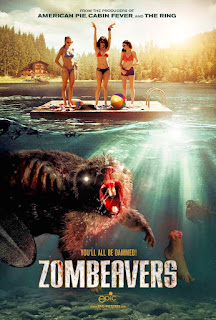 Welcome back campers!  The week has brought us all closer together hasn’t it?  We learned a lot about each other, shared some laughs and had uncomfortable sexual encounters that we will never speak of again.  Or was that just me?
Sadly, most of us have outgrown traditional summer camps.  So the majority of us just hang out by the lake.  Swimming, fishing and skinny dipping have all been an integral part of the summer life of most Southern students.  But most importantly, sharing laughs and memories with all of your friends.  Zombeavers has all of that.  Friends, laughs and skinny dipping are all here in the feature directorial debut from comedy writer Jordan Rubin.
Opening with a fantastic throwaway scene featuring comedian Bill Burr and an unrecognizable John Mayer (yes, that John Mayer), Zombeavers tells the story of Mary, Zoe and Jenn, three sorority sisters who decide to spend a weekend at the lake to get away from their boyfriends.  The boyfriends come anyway and, after the sexy time, they encounter the title creatures.  When Zoe’s beau loses a foot to one of the beavers, the body count starts to rise…from the dead!  Sorry, I had to have a non-beaver related pun in there somewhere.  Because this movie took all the good beaver ones.
Obviously, this flick isn’t meant to be taken seriously, but there are some scares to be had in this funny little movie.  With a run time of well under 90 minutes, this movie gets in and gets out pretty quick, which is actually a great thing.  Because a movie like this could go wrong or wear out its welcome very quickly.  Zombeavers does neither.  The action packed and insane climax leaves you with a feeling of satisfaction, followed by a fun gag reel and a post credit scene that simply makes no sense.  While Zombeavers isn’t going to be winning any big awards, it is a schlocky, heart-on-its-sleeve B-movie with a ton of heart.
**Chris Roberts is the founder and head writer at SecondhandTerror.com.  He is in his 30s and is married with two great kids (Sorry ladies).  He loves classic and unsung horror from the 80s & 90s. His passion for all things horror began in his early teens thanks to a taste for the weird and a membership to Blockbuster. He writes fan fiction and original works, as well as volunteer as a state representative for Scares That Care.  His hobbies include collecting VHS tapes and the souls of children.