Today we have Chris from SecondhandTerror.com lending a helping hand during Summer Camp Week.
Chris will be showing some love for the slasher classic Sleepaway Camp 3, and he will also be returning tomorrow for weekend duties here at Camp Carnage. Go and check his blog out, this guy is awesome! 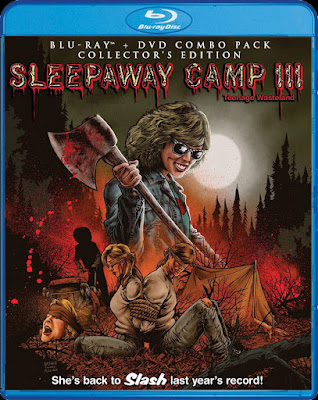 I’ve always wanted to go to summer camp.  It was a childhood experience that I was never extended my way.  Granted my only exposure to summer camps were from movies Meatballs, Wet Hot American Summer and of course Friday the 13th.  So honestly, had I ever been given a chance to go to summer camp, I probably would’ve gotten kicked out for trying to sneak into the girls’ bunks and/or showers.  Or I would’ve been an outcast like Angela Baker.  Poor gal can’t catch a break.  Sure, she got away at the end of Unhappy Campers, but she goes right back to Camp Rolling Hills (now known as Camp New Horizons) for another round of Slice the Sinner.

Now a social experiment in bringing together the rich and privileged kids of the USA with the underprivileged (aka gangs and minority stereotypes), Camp New Horizons is run by Lilly and Herman, a lazy old woman and her horn dog husband who are just in it for the paycheck and the media attention.  Posing as a young New Yorker named Maria, Angela (played once again by Pamela Springsteen), gets the drop on the new owners as well as the teens by killing them one by one in very creative ways.  There is a third counselor, Barney Whitmore, the father of Sean, the young would-be hero Angela decapitated in SC2.  It is never explained exactly why he chose to be a counselor for the camp, but he does say that he would kill Angela if given the opportunity.

Among my favorite deaths is Tawny, a newscaster who makes a brief appearance conducting interviews before her “accidental overdose” and Bobby, the jock who likes politics and bondage (couldn’t make that up).  I won’t give any spoilers on Bobby’s death, but it is interesting that the actor portraying him is Haynes Brooke.  If the name doesn’t sound familiar, that’s okay.  He is The Sun in the Jimmy Dean breakfast commercials.  When it’s down to the final few, the movie tends to lose its footing with Angela getting the kids to play a trust game similar to what they’d been doing the whole movie, only to reach the climax all too early without showing what happened to the other kids.

Though this movie was once hard to find unless you got it on eBay, it has since been given the Blu-Ray treatment thanks to Scream Factory.  With a clean new transfer and some fun new bonus features, it’s worth picking up, along with the two earlier films.

So even though I never made it to summer camp as a kid, I feel pretty good knowing I can always fall on these movies and fantasize on how fun it might have been.  You know, minus the blood.  And more boobies.

**Chris Roberts is the founder and head writer at SecondhandTerror.com.  He is in his 30s and is married with two great kids (Sorry ladies).  He loves classic and unsung horror from the 80s & 90s. His passion for all things horror began in his early teens thanks to a taste for the weird and a membership to Blockbuster. He writes fan fiction and original works, as well as volunteer as a state representative for Scares That Care.  His hobbies include collecting VHS tapes and the souls of children.